In Ubuntu 16.04 I had version Actiona 3.9.1 already installed and decided to upgrade but could not do so through Synaptic Package Manager.

After a first false build ... Project ERROR: opencv development package not found ...
I had to install libopencv-dev package which installed further 43 dependency packages.

I could then run command ...

and the build completed nearly to completion but with these last few lines ..

Within the 3.9.4 src directory I see a build sub-directory created ...

and there is actiona sitting in there as an executable app.
But if I click on this executable I just see a pop blank MainWindow.

Can you see any missing step in build process?

I have Qt Creator installed and when I try to run actiona.pro in there I also see blank
MainWindow.
Top

I made another attempt and this time I see actiona and actexec executables in the actiona folder.

I don't know why the first build attempt failed. But I'm now in business with 3.9.4 launching.
Top

Hi, not sure why it failed the first time, especially if you have installed all the dependencies with

But if it works now, great.
"My software never has bugs. It just develops random features."
Top

Some nine months after my first build I am now trying to build Actiona version 3.10 in Ubuntu 16.04.
I have version 3.9.1 working but it has a few bugs.

Followed instructions here https://wiki.actiona.tools/doku.php?id=en:compilation
I seem to have all the Ubuntu dependencies installed but when I run the command

I see multiple errors such as here ..

Do I need to update Qt5 since there are multiple references to ‘QString::QString(const char*)’ is private ?

The report ends with ...

I think the issue here is that Qt is probably too old. What is the result of

And here is a fuller build report ...

I now have successfully built Actiona 3.10.0.

It seems that I was premature in marking this as SOLVED.

I did succeed in building an executable (through QtCreator) but I see that some components are missing when I try to run an earlier written *.ascr script.

The System and Data components sets are not seen in Actiona GUI.

Retracing my steps I ran this command ..

Here are the last few lines of the terminal output ..


Can I ask what version of qmake is required to create Actiona 3.10.0?

I have only been able to partially compile through QtCreator debug mode and that is how I created a partially working binary.
Top

The error messages that you show indicate that the Actiona executable was not created successfully:

This could mean that you are trying to start an older version of Actiona, or a previously built one. Does it work if you start the program from within QtCreator?

I will install a VM with Ubuntu 16.04 and try to see if I can reproduce this issues.
"My software never has bugs. It just develops random features."
Top

I decided to start afresh. Remember that recently I installed Qt5.12.1 in my /opt directory.

Followed the instructions here .. but skipping the installation of ..

since I reason that this might overwrite my fresh installation of Qt5.12.1.

From within that folder run ..

Reached this line in terminal output without obvious errors


then follows a stream of errors typically as follows ...

Here are the closing lines from terminal.

The common reference in these errors is


However actiona executable is seen in actiona folder and it can launch as version 3.10.0 but there are missing components in the left hand components panel.

System and Data component sets are missing.and there are some references as follows:

It may be that there is some incompatibility with latest Qt5 installation 5.12.1?

I have not yet tried building using QtCreator again since the above errors are seen.
Top

I attempted to build 3.10.0 using QtCreator.
As explained this produces a partially built actiona executable.
During the compilation a stream of errors is seen. These are the opening lines .. 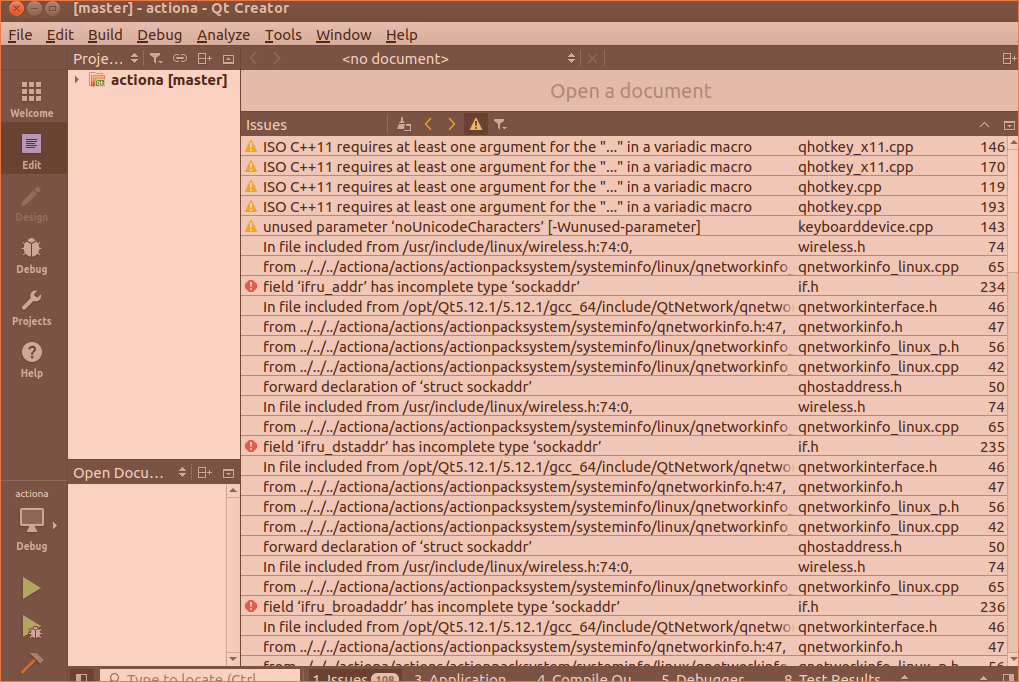 I installed Ubuntu 16.04 on a virtual machine and the good news is that I can reproduce the problem you have with the error

The bad news is that it seems to be a bug in the development headers of the Linux kernel, so not much you can do. Can you upgrade to Ubuntu 18.04? That would solve this issue.

The fact that you can partially build Actiona and run it is because there a multiple modules that contain actions. Some modules have failed building because of the aforementioned error, and some actions are not available.
"My software never has bugs. It just develops random features."
Top